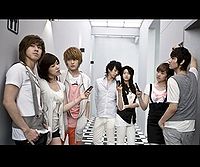 "Haptic Motion" is the collaboration digital single between Dong Bang Shin Ki and Girls' Generation. Te title track was used for the Samsung's Anycall Haptic commercial series. Although all Dong Bang Shin Ki members took part in the song and the commercials, only three Girls' Generation members were featured (except for the Airport ver. commercial, where all the members appear): Jessica, Yoona and Tiffany.

Girls' Generation released their own version of the song on the mini album Gee, titled "Himnae! (Way To Go)".