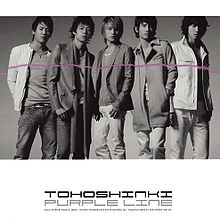 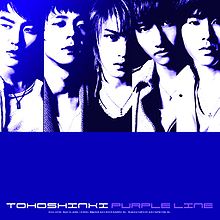 Purple Line is Tohoshinki's 16th single. It was their first Japanese single released in Korea in a different edition, with an active promotion, and also to have a music video in both languages. The PV was shoot in Korea. The song was used as Suzuki's Chevrolet MW CM song in Japan.

Purple Line is the group's first single to reach #1 on the Oricon weekly charts, becoming the first foreign male group and second Korean artis, after BoA, to rank #1 on Oricon charts. Although they managed to get the #1, the sales weren't high and they also gained the record for the biggest drop, from #1 to #31, on their second Oricon weekly chart.