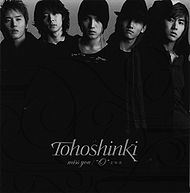 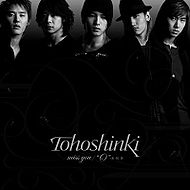 "miss you / 'O' - Sei・Han・Gou" is Tohoshinki's eighth single. The CD+DVD version was also available with six jacket size cards, five of which featured individual members of the group. The CD only version included a 12-page special booklet as a first press bonus. The second track is the Japanese version of "'O'-Jung.Ban.Hap", included on their fourth Korean album of the same name. With this single Tohoshinki ranked for the first time in the Top 3 on Oricon.