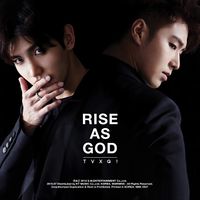 RISE AS GOD is a special album released by TVXQ!. The songs "Champagne" and "Rise As One" were used as the lead tracks. It was the duo's last musical release before taking their two-year hiatus to complete their mandatory military service and was their newest full-length album in almost one and half year after their 7th repackaged studio album, Surisuri. The album can be seen as the way of the duo showing their gratitude to the fans who have consistently supported them for years. The title of the album was inspired by the duo Hanja name, 東方神起 (Dong Bang Shin Ki), which roughly translates to "rising gods of the east".

The album reached #1 on Gaon weekly and monthly charts, then later managed to reach #10 on yearly charts for selling around 152,000 copies.
The album also reached #6 on Oricon weekly charts and managed to sell around 34,000 copies.