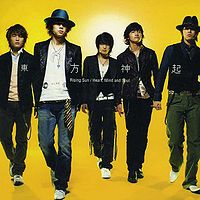 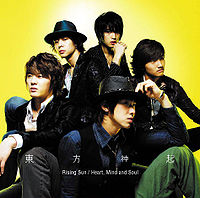 "Rising Sun / Heart, Mind and Soul" is Tohoshinki's fifth single and first double A-side single. The first track is a Japanese version of the song released in Tohoshinki's third Korean album, titled "Rising Sun (Sunsu)". The second song is a recut track from their first Japanese album, also titled Heart, Mind and Soul. It reached #22 on the Oricon charts and sold 7,376 copies.