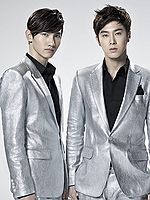 "I Don't Know" is Tohoshinki's second digital single. Two months later it was included on their 32nd single, "Superstar".