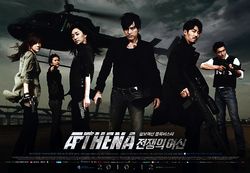 "ATHENA" is Dong Bang Shin Ki's third digital single, and first release after their comeback as a two-member group. The song was used as theme song for the drama Athena: Goddess of War. The cover art used for the single was also used as the official poster for the drama.