Catch Me -If You Wanna- 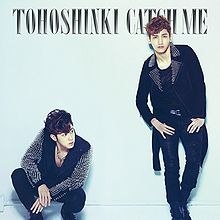 "Catch Me -If you wanna-" is the 36th single released by Tohoshinki. The single was released in four versions: a limited CD+DVD edition, a regular CD+DVD edition, a regular CD Only edition and a Bigeast Board edition. The limited CD+DVD edition comes with a random photocard (1 of 6), the CD Only edition comes with a 12-page booklet and a random photocard (1 of 6, first press only), and the Bigeast Board edition comes with a picture-labelled CD, a random photocard (1 of 6), and a jacket-shooting offshot movie included as CD-Extra.
The title track is a Japanese version of the Korean song "Catch Me", included on their sixth Korean album of the same name, and was used as theme song for Fuji TV's drama Saki. "I Know" was release as their eight digital single and was used as ending song for the talk show Catherine the Third.