I Think U Know (Tohoshinki) 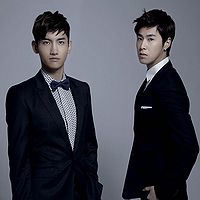 "I Think U Know" is Tohoshinki's third digital single. Fourth month later was included on they 5th album, TONE.