"Run Devil Run" is the fourth Korean digital single released by Girls' Generation. The song is the title track to their repackaged second studio album of the same name, and was used as the lead single. The cover art of the repackaged album was also used for the digital single.

A Japanese version of the song was released almost one year later as their third Japanese digital single. A promotional picture from Run Devil Run's promotions was used as cover art.

The song talks about a cheating boyfriend whom is a playboy that is involved with another girl even while sitting next to them. They sing "Run Run Run" letting the cheating boy friend know that he should run or they will enact their revenge on him; it doesn't matter if he is there, they will not take him back no matter how much he begs, and until they find a boy right for them they will be by themselves.

American artist Ke$ha recorded in 2008 a guide track of "Run Devil Run" which leaked on YouTube and was never released. 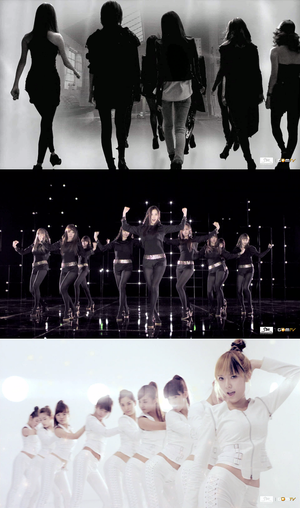 A different Japanese music video was released on April 2011, more than two months after the release of the Japanese digital single.