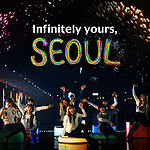 SEOUL (Seoul City Promotional Song) is the collaboration song between Girls' Generation and Super Junior. The song was used for the "Infinitely Yours" campaign for the promotion of Seoul's tourism. The commercials were mostly shown in Japan and China.

Not all the members from both groups participated in this release (although it was not individually credited). The eight participating members were: