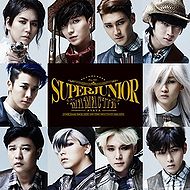 "MAMACITA (AYAYA)" is a song recorded by Super Junior that can be found on their seventh Korean album MAMACITA as track #1. It was later released as the title track to their seventh Japanese single. The single was released in three versions: a limited CD+DVD edition, a regular CD Only edition, and a limited CD Only fan club edition only sold on mu-mo store. All editions came with a random trading card (one of 10).