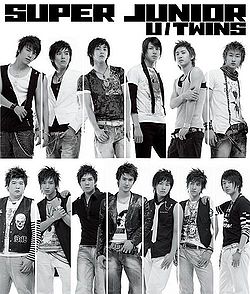 "U / TWINS" is Super Junior's first Japanese single. It was released to commemorate their first Japan fan-meeting at Nippon Budokan in Tokyo. The single is the first Korean single to be listed in the top 10 of Japan's Oricon Weekly Chart. "U [Japanese version]" was only included in the limited version of the single as a bonus track. The limited version was released for free to fans who attended the fanmeeting.

The single reached #8 on the Oricon charts, and charted for 2 weeks selling 21,379 copies according to Oricon Single Charts.