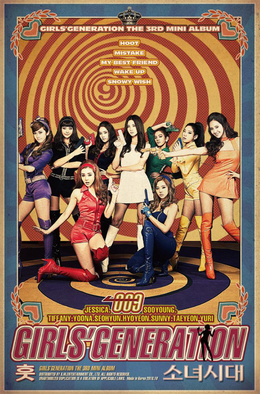 Hoot is Girls' Generation's third mini-album. The mini-album was later released in Japan with a slightly different tracklist (but the same original Korean songs). Four different editions were released in Japan, 3CD+DVD editions, and CD Only edition. The three CD+DVD editions, come with six bonus tracks which are some of the group's biggest (and latest) Korean hits. Additionally, the "CD+DVD Deluxe Edition" includes extra DVD footage. As bonus goods, the "CD+DVD Deluxe Edition" and "CD+DVD Limited Edition" come with the original Hoot photo booklet (Korean edition), a sticker and 1 random photocard (1 of 8). "CD+DVD Limited Pressing Edition" doesn't comes with extras and includes only the DVD with "Hoot" music video. All the songs included on this mini-album and it's different versions were Korean-language songs.

The song "Hoot" charted on the Gaon 2010 digital yearly charts at #28 with 2,138,179 in sales. The group attended the Melon Music Awards winning Hot Trend Song award for the song, as well as the Artist of the Year award and the Best Dressed Singer award.

A day before the Korean edition of the mini-album was released it received 150,000 pre-orders. The mini-album reached #3 on the Gaon 2010 yearly charts with 163,066 copies sold.