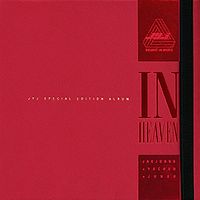 In Heaven is JYJ's first Korean full-length album. The album includes previously released songs from their Music Essay album Their Rooms. The songs "Fallen Leaves" and "Ireum Eomneun Norae Part 1" had been partially re-titled to contain respectively the Korean and English translations of the titles. The song "I.D.S (I Deal Scenario)" has also been re-titled to just "I.D.S".

The album was released in four editions, Brown, Blue, Red and Black, without differences between them except for the packaging color. The Black Edition was released two weeks later in order to fulfill the pre-oders for the album after the company had to stop the production of the three original editions due production issues. The songs "IN HEAVEN" and "GET OUT" were used as lead tracks.

In Heaven was re-released as a Special Album two months later, including two remixed songs and a DVD featuring the QR movies that were included on the original release' booklet. So far the album has sold over 40,000 copies in Japan.