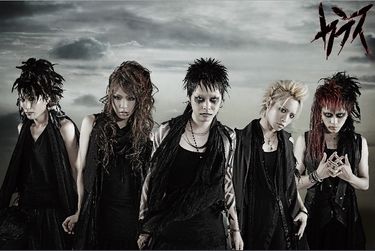 Karasu (カラス, Crow) is a project formed by five well-known visual kei artists (Tatsurou, Hiroto, Mizuki, Dunch and Kenzo). Karasu made their debut in the summer of 2009 at the Jack In The Box event. They are a visual group who have a dark look and varied sound.

Karasu first unveiled themselves on stage at “MAVERICK DC GROUP PRESENTS JACK IN THE BOX 2009 SUMMER” held at Makuhari Messe on August 15th, 2009. They covered 2 songs and also performed "LASTICA", their original number created just for that day.

Three months after their debut, Karasu managed to finish recording "LASTICA Studio ver.” and came back to the visual scene with this song in November 2009. At first, this unit was a one-shot session band assembled by Tatsurou, both leader and eldest member, but now, Karasu become a long-term group with the release of their second single "free".