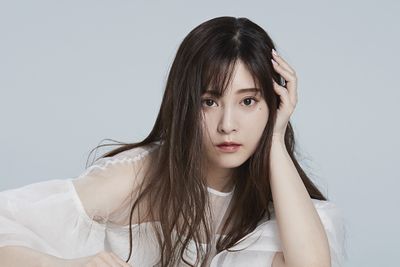 Keiko Kubota promoting "Inochi no Hana / Be Yourself" (2020)

Kubota Keiko (窪田啓子) is a Japanese singer best known for her work with FictionJunction and Kalafina. She made her debut as KEIKO under the label avex trax in May 2020.

In 2005, she collaborated with Kajiura Yuki for Tsubasa Chronicles soundtrack to sing "Kaze no Machi e", credited as FictionJunction KEIKO.

In 2006, she was part of the duo Itokubo with Ito Ayaka. The duo was able to released only one single, "Into the sky" which was used in the PSP game Beautiful Katamari. After that, the duo disbanded.

In 2007, Kajiura Yuki started working on the soundtrack for Kara no Kyoukai novel's movie adaptation and founded Kalafina, to which Keiko belong, which was originally set to perform the ending theme songs for the seven movies. After the movies were finished, Kalafina continued to provide music for other animes like Kuroshitsuji and documentary shows like Rekishi Hiwa Historia.

In 2008, Kajiura Yuki also started performing live concerts and Keiko was a part of the singing unit along with Oda Kaori, Ootaki Wakana, and Kaida Yuriko; this brought up the idea for FictionJunction which featured the four vocalist and is a separate unit from FictionJunction YUUKA.