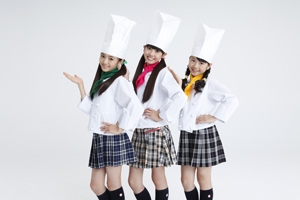 Minipati (ミニパティ) is a sub unit of the idol group Sakura Gakuin. They are the third sub unit to debut from the group, following Twinklestars and BABYMETAL. The group first appeared on Sakura Gakuin's debut album Sakura Gakuin 2010 Nendo ~message~ in April 2011, performing the tracks "Happy Birthday" and "Princess☆a la mode". The second song did not appear on the limited editions of this CD.