Shuya Mizuno, stage name "Shu-ya" (しゅうや), is one of Ayumi Hamasaki's Back-up Dancers. He was born in Sapporo, Hokkaido. 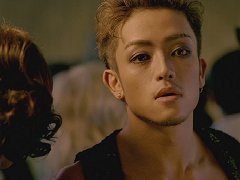 Shu-ya's first major role in the PV for my name's WOMEN.

Shu-ya is best in free-style. He has won a number of prizes in his late teens, including the Sapporo Dance Battle (SDB) 1997 and 1998 as well as the SDB Grand Champion 1997. He formed a dance group called "STALKERS" with ZIN, another one of Hamasaki's dancers.

Before he joined Hamasaki's team, he was BoA's dancer (2004). He was also one of Namie Amuro's dancers who appeared in MTV Video Music Awards Japan 2005.

He joined Ayu's dance group in 2004 and his first appearance on Ayu's stage was Countdown Live 2004-2005. Starting from Hamasaki's my name's WOMEN, Shuya appears as the leading actor in some of Ayu's latest PVs, including part of Me and Days.