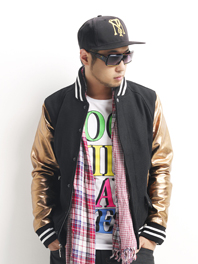 NAUGHTY BO-Z (ノーティー・ボーズ) is the producer, composer and DJ of the R&B duo MAY'S. Aside from producing songs for his group, he has produced songs for acts like Clench&Blistah, NATURAL8 and WISE.

Before MAY'S formation, NAUGHTY BO-Z had played guitar in a band formed in Saitama in 1996, he stayed with the band until the formation of the duo in 2002. He is the leader of the duo, composer, arranger and also he designs the website look and album/single covers. Kawai used to play hard rock during his school days, but he always preferred R&B and his preference is showed on MAY'S songs which incopores R&B with pop and pop-rock, like their indie works.

His most successful work as a producer, was CLIFF EDGE's "BIRTH ~You're the only one Pt.2" which topped the USEN charts, becoming an awesome digital seller.