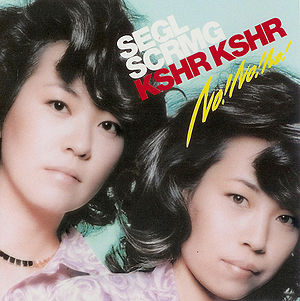 No! No! No! is the fourth studio album (third major label album) released by Seagull Screaming Kiss Her Kiss Her. The album's title comes from the first three songs on the album: "NO STAR", "NO TELEPHONE", and "NO LUCK", all three of which contain "NO" in the title. This is the band's first studio album not to include their long time drummer Karashima Takaharu, and is their first album as a duo. Instead the band recieved help from support drummers such as their manager Arakawa Yasunobu and Higurashi Aiha's then husband Watanabe Yoshiki. Higurashi has described the album as a straight forward punk-rock album. The album was self-produced by the band.

During the album's recording Higurashi "cling[ed] to her job as a musician", and put everything she had into the music. She has since revealed that this was because she suffered from postpartum depression after giving birth and found it easier to deal with work instead. She survied by "drinking vodka while [she] was recording, to keep [her]self going. The album sounds happy because [Higurashi] wanted to be happier. [1]"

For the album cover, Higurashi told the designer that she wanted the cover to look similar to an old Roxy Music cover. It features Higurashi and Koyama Nao with old Japanese permed hairstyles. It was suppose to represent "something not real, [and] something unreal."

After four months of the CD being released, the album was re-released on a vinyl record. Both version of the album failed to chart on the weekly Oricon chart.