Seagull Screaming Kiss Her Kiss Her 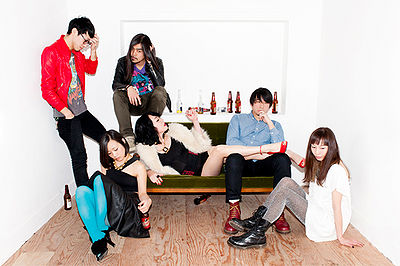 Seagull Screaming Kiss Her Kiss Her (2014)

Seagull Screaming Kiss Her Kiss Her (シーガル・スクリーミング・キス・ハー・キス・ハー) is a Japanese alternative rock band. The group was founded in 1992 by Higurashi Aiha. The group started out as an un-named duo of Higurashi and Ito Sachiko. In 1994, Ito left the band, and Koyama Nao and Karashima "Takape" Takaharu joined. The band became well known for their indie and lo-fi sounds and were the most famous of the Shibuya-kei scene during the Nineties. In 2002, Higurashi dissolved the band to focus on her solo career. In 2014, the band reformed as a six-piece and recorded an album of new material, Eternal Adolescence.

In 1992, Higurashi Aiha started playing as a two piece band with her friend Ito Sachiko. For the duo first several shows they played as an un-named band. In the beginning the duo had more of a cutesy pop-rock style, but soon wanted to try something different. At this point Ito wanted to study abroad in Germany. Higurashi liked the idea of studying abroad, because she would be able to learn another language, experience a new culture, and hear different music. After talking it over with her parents, Higurashi went to London, England at the age of 19. While in London she mainly went out to clubs and shows instead of going to school. She saw many noise rock bands such as Dinosaur Jr. and Lush. After her Visa expired, Higurashi went to New York were she attended a New York University prep-school.

After the girls returned to Japan they dedicated themselves to the band. At this point one of their friends suggested the name "Seagull Screaming Kiss Her Kiss Her", which came from a song of the same name by British new wave band XTC and is found on their The Big Express album. The girls decided to keep the name and liked it became it was too long. In 1993, the band signed to an indie label and released their debut mini-album, Seagull to Hell. After this release Ito Sachiko decided to leave the band.

In 1994, Higurashi recruited two new members: bassist Koyama Nao and drummer Karashima Takaharu aka "Takape". Later on that year the band release their first work with the new line-up entitled, Swallow Up. The band then signed with the Polystar record label in 1996, and released their third mini-album, Fly. The group ended the year by releasing their first full length record, Give Them Back to Me and their fourth mini-album, Pink Soda. 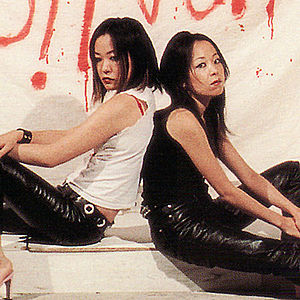 Seagull Screaming Kiss Her Kiss Her (2000)

By the time of their third studio album in 1998, 17, the band had changed their sound once again, opting for a stripped-down, lo-fi approach akin to PJ Harvey's early work and bands like Dinosaur Jr. Higurashi has stated the reason for this was because she was exhausted. The group had just finished up the American leg of their tour and they were tired. Not only that, but after creating and playing all of the effects on It's Brand New she was not entirely satisfied with the production, and wanted to take a different approach with the new record. The album's cover showcased Higurashi stripped down, just like the album's production.

In 1999, the band once again went through some hard times. The group was having trouble with their drummer, Takape who was causing tension within the band. After the release of the band's "Pretty in Pink" single, Higurashi asked Takape to leave the band. The duo girls remained a duo, and started work on their next album. For the album they called on their friends to help out with the drumming duties: Higurashi's then husband Watanabe Yoshiki and the band's manager Arakawa Yasunobu. With their help the band was able to record their fourth studio album, No! No! No!. Higurashi described the album as a straight forward punk-rock record.

In 2001 the band released their fifth and final studio album, Future Or No Future. Higurashi stated that she was happy during the album's recording so she wanted to create a fun pop record. Unlike their previous albums the band decided to release singles: "Sentimental Journey" and "Lullaby". Around the tenth anniversary of the band in 2002, the duo made the decision to split up. Later that year their record company compiled two best of records: Dying for Seagulls and Red Talk.

After the break-up Higurashi went on to compose, play, and produce the debut single for former JUDY AND MARY vocalist YUKI, "the end of shite". Soon after that she started her own solo career and signed with Sony Music Entertainment and in 2005 she started up the indie rock band Higurashi Aiha and LOVES! and The Girl.

On January 1 2014, Higurashi announced the reformation of Seagull Screaming Kiss Her Kiss Her on her Twitter account, alongside ex-LOVES. bassist Kentaro Nakao (Crypt City). The newly expanded six-piece line-up, including THE GIRL and Tsubaki drummer Naoko Okamoto, played their first show at WWW in Shibuya on May 5. The band has been highly active on the Tokyo and Osaka live scene, and will release their first album of original material in 14 years, Eternal Adolescence, on September 9 2015 featuring ten new songs. The album's release will be supported by a new tour of Japan.