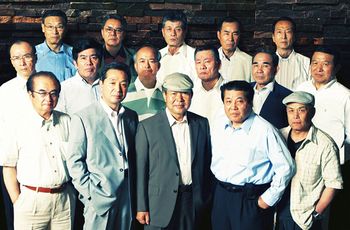 OJS48, short for "Ojisan 48" (uncle, old man), is a male Japanese idol group produced by Akimoto Yasushi. The group was formed with Nakatani Mitsuo, a retired police officer who debuted as an enka singer in 2009, and 15 of his former colleagues. All of the members are former Osakan police officers and detectives, whose ages average 61 years. OJS48 debuted in 2010 with the single "Shinkokyuu". They are signed to the label Victor Entertainment and managed by PYTHAGORAS PROMOTION (the same management as SKE48).