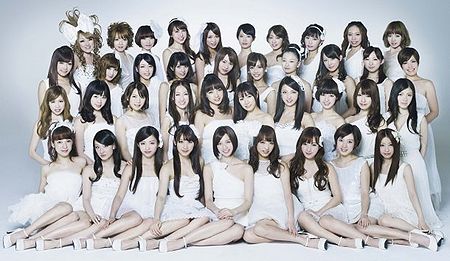 SDN48 (short for Saturday Night 48) was an "adult" idol girl group produced by Akimoto Yasushi. The group was announced as being part of an "adult only" show being performed every Saturday at 10 PM in AKB48's theater in Akihabara. However the initial idea of just performing on Saturday Nights seemed to have dropped and they performed throughout the week until their disbandment in March 2012. All members of this group were above the adult age of 20 and the group was affectionately referred to by AKB48 member as an "older sister" group. SDN48 shows were meant to be a more mature and sexier show than the typical AKB48 show and have an age limit of 18 or older . 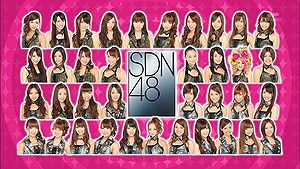 SDN48 was first announced as a series of "adult only" shows in 2008. In 2009, the two oldest from AKB48's Team K Ohori Megumi, and Noro Kayo became the first members confirmed for the group. At the same time, auditions for the other members were held. When the lineup was announced 22 girls were chosen, 18 girls and 4 Under girls (equivalent to an AKB Kenkyuusei) including Sato Yukari from Team A and Urano Kazumi from Team B. However one girl dropped out and Umeda Haruka was promoted from Under girls (bringing the total to 21). The group debuted in its 1st Stage, Yuuwaku no Garter, on August 1, 2009 (a Thursday instead of a Saturday due to an event on August 3rd).

On September 22, 2009, Kohara Haruka transferred from AKB48's Team B to SDN48 as an Under girl. Two days later, Under girl Iwata Yuki withdrew from the group due to a medical condition. 1st Generation member Serina announced that she was actually born in 1985 rather than 1988 making her 24 instead of 21.

On December 1, 2009, Maeda Eiko (Harada Ourei) transferred from SKE48's Team KII to SDN as an Under girl. She would use her real name, Tezuka Machiko, rather than the two stage names she was previously known by.

During the their one year anniversary performance on August 1st 2010, the group announced their plans to debut on the major label Universal Music with the members selected in the senbatsu election. The top 12 of 27 members would be chosen to participate in their debut single to be released on November 24, 2010. The results of the senbatsu single selection aired on September 08, 2010 on the group's original tv show, Suppon no Onnatachi.

On November 24, 2010, SDN48 released their debut single GAGAGA. The single reached #3 on the Oricon Weekly Singles Chart and became the #99 best selling single of 2010. 5 days later GAGAGA was released in Korea.

At the end of January 2011, Ito Kana was on hiatus due to poor health from influenza. However on February 10, 2011 she announced her withdrawal from the group. SDN48 released their second single on April 6, 2011 which was originally scheduled on March 23, 2011 but was later postponed due to the earthquake and tsunami that devastated Japan.

On May 27, 2011 during the "Minogashita Kimitachi e" ~AKB48 Group Zenkouen~ Concert (Revival Concerts for all "48 Groups") for SDN 1st Stage "Yuuwaku no Garter", 7 Third Generation girls made their debut including ex-AKB48 first generation members Komatani Hitomi and Tojima Hana and rhythm zone artist miray. Two months after the announcement was made, third generation member Hayakawa Sayo abruptly withdrew from the group. Reports indicate that she only participated in SDN48's theater shows as a MC and failed to learn some of the choreography and songs of SDN48's stage.

In October 2011, it was announced by leader Noro Kayo that all members of SDN48 would graduate on March 31, 2012. The group released NEXT ENCORE, a best-of album, on March 14 and a studio recording CD and DVD for Yuuwaku no Garter on March 28. A farewell concert was held at AKB48's stage on March 31. 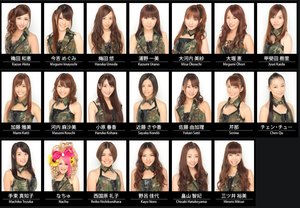 Note: All of the members have graduated from SDN48 on Mar. 31, 2012 unless otherwise noted