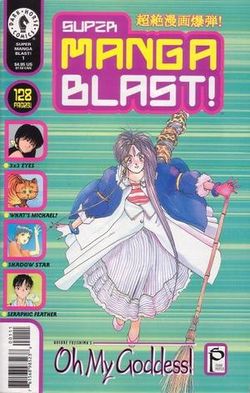 SUPER MANGA BLAST! was an North American-based, monthly shonen manga magazine, published by Dark Horse Comics. The magazine began as a collaboration between Dark Horse, Studio Proteus and Radio Comix. The first issue hit the shelfs in March 2000, with each issue at 128 pages and retailing for $4.95 an issue [1], however with the October 2001 issue the price was changed to $5.99 [2]. In November 2005, Dark Horse issued an announcement stated that the magazine was cancel and it's final issue would be issue #59 February 2006 [3].

Series that were running when the magazine ended.

Dark Horse first got together with Studio Proteus and Radio Comix to create a monthly manga anthology to compete with rival companies who already had successful anthologies running (Viz Media's PULP and Animerica Extra and Tokyopop's SMILE). The three production agencies decided to create a shonen based comic. Although the series picked for the magazine were seinen, mainly more adult orientated and ran in Japanese phonobooks such as Afternoon and Young Magazine, but they ended up being highly edited to fit to the younger audience. The magazine started with five titles: What's Michael?, 3x3 Eyes, Seraphic Feather, Oh My Goddess!, and Shadow Star. Although prior to the start of the magazine three of the series received monthly comics and sub-sequential graphic novels: 3x3 Eyes, Oh My Goddess!, and What's Michael?. The serialization of these series started around the volume three for 3x3 Eyes, What's Michael? started around volume five, and the magazine featured previously "lost" English manga chapters from Oh My Goddess!.

After the finish of the "lost" chapters Oh My Goddess! finished in April 2001 issue #12. The following issue featured a new series, Club 9, from the manga-ka of What's Michael?, Kobayashi Makoto [4]. A few issues later the price of the magazine was raised to $5.99.

In October 2002, Shirow Masamune's cyperpunk classic Appleseed was added to the magazine. The series ran from issue #25 to February 2004's issue #39. This serial was of the Aplleseed Hypernotes arc of the story. One of the conditions of publishing the work in English by Shirow was that it could run in SUPER MANGA BLAST!, but he did not want to to be published in to a collective volume as he felt the work was not complete [5]. When the series was added to the magazine the magainze became aimed towards mature audiences and received a label saying so, but was later removed when the series ended. The issue after Appleseed ended, 3x3 Eyes received its final installment in the magazine, which completed the eighth volume.

In March 2004, Sonoda Kenichi's Cannon God EXaXXion was added to the line-up after losing two titles. The magazine stuck with this line-up for over a year until September 2005 when Club 9 was removed from the magazine. Two months later Dark Horse announced that the magazine would be ending. The last issue came around in February 2006 with issue #59, and contained the what the magazine claimed to be the "final chapter" of What's Michael?, although the comic is still running in Japan today. Appleseed was the only series to actually finish. All of the other series from the magazine were discontinued by Dark Horse and were never finished.