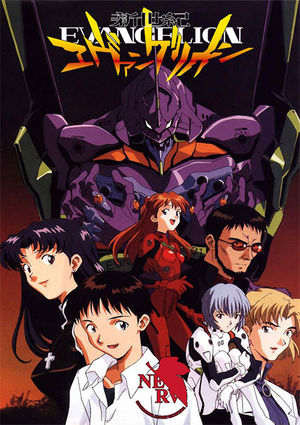 Shinseiki Evangelion (新世紀エヴァンゲリオン) or Neon Genesis Evangelion is a apocalyptic mecha anime franchise created by GAINAX company and Anno Hideaki. It is known as the most popular anime series in both Japan and North America.

The series first launched in October 1995 as a 26 episodes TV series and ended in March 1996. However, the ending from the TV series is too complicated and did not satisfy the fans, GAINAX decided to make two more movies, telling an alternate ending. Shinseiki Evangelion Gekijouban DEATH AND REBIRTH Shi to Shinsei (新世紀エヴァンゲリオン 劇場版 DEATH & REBIRTH シト新) was released on March 15, 1997, recaped the TV series and leaded the story to the second movie. Four months later, Shinseiki Evangerion Gekijouban Air/Magokoro wo, Kimi ni (新世紀エヴァンゲリオン劇場版 Air/まごころを、君に), released on July 19, 1997 put an end to the series. The TV series and both movies were licensed in North America.

In September 2006, a new project called Rebuild of Evangelion was revealed. The project features four movies which are remake of the TV series. The story was edited to be less complicated and oriented to normal viewers. It also featured new storyline, new characters and a new ending.

The story is set in the 21st Century of a fictional Earth. In 2000, the Second Impact occurred and destroyed Antarctica and half of the population of the Earth, it also leaded to an global climax change.

The year is now 2015, Ikari Shinji, a 14 year-old boy, summoned to TOKYO-3 to join NERV, a secret organization commanded by his father. His arrival is interrupted by the attack of the Third Angel, a monstrous extraterrestrial life form who appeared after the Second Impact. Rescued by Captain Katsuragi Misato, Shinji is bought to NERV's underground headquarters. Here, his father revealed that Shinji is chosen to be the pilot of Evangelion Unit 01, a giant biological robots created to fight the Angels to defend TOKYO-3. Upon the shock, Shinji denied piloting the Evangelion but after seeing a heavily wounded Ayanami Rei brought to fight the Angel, he agrees to pilot the machine.

The series focused on the Evangelion's pilots who are called the Children: Shinji Ikari (Unit 01), Ayanami Rei (Unit 00) and Soryu Asuka Langley (Unit 02) and the relationships between them along the mystery of the Evangelions and the Angels.

In the beginning of the series, Shinji was summoned to NERV by his father who abandoned him in the past. Upon his arrival to NERV, he was revealed to be the pilot of Evangelion Unit 01. First, he denied piloting the giant robot which hurt his feelings but he later considers piloting it as a part of his life. After transferring to TOKYO-3, he is guarded by Captain Katsuragi Misato and lives with her. He also shares a close relationship with other Children.
Voiced by Ogata Megumi

Rei first appears in the first episode of the TV series as a pilot of Unit 00. She was heavily wounded after the test of Unit 00 and makes Shinji change his decision about piloting Unit 01. Rei appeared to be a quiet girl by the beginning of the series but she later opens her heart and befriends with Shinji and Asuka. She also has a special feeling towatd Ikari Gendo, Shinji's father.
Voiced by Hayashibara Megumi

Misato is the operations director for Angel battles of NERV and the guardian of both Shinji and Asuka in TOKYO-3. Aside from works, she is also responsible for raising both children and expresses a deep care for Shinji. Misato is the only survivor of the Second Impact when it occurred in Antartica.
Voiced by Mitsuishi Kotono

Asuka and Unit 02 transferred from Germany to Japan in episode 8 to reinforce TOKYO-3 in the battle with the Angels. After joining NERV, she moved to Misato's apartment and lives with her and Shinji. Asuka often fights with Shinji but she also have feelings for him. In Rebuild of Evangelion, her name is changed to Shikinami Asuka Langley (式波・アスカ・ラングレー).
Voiced by Miyamura Yuko

A mysterious boy who transferred to NERV by the end of the series to replace Asuka as the pilot of Unit 02 after her synchronization rate decreased. He also expresses directly his feeling to Shinji. It was later revealed that he plays a major role in the secret of the Angels and the Evangelions.
Voiced by Ishida Akira

The music of Rebuild of Evangelion is composed by Sagisu Shiro and produced by KING RECORDS. The opening theme of the TV series, "Zankoku na Tenshi no Thesis" by Takahashi Yoko is known as the most popular anime song while endings are various covers of Bart Howard's "Fly Me to the Moon".