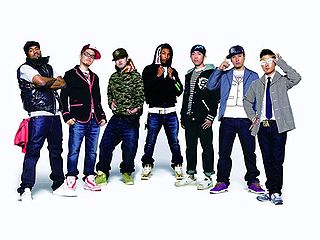 TERIYAKI BOYZ are a Japanese supergroup of 4 hip-hop artists from some of the biggest J-Urban groups around. The group is headed by NIGO, the founder of A BATHING APE, under Def Jam Recordings Japan and (B)APE SOUNDS. They debuted in 2005 with the album BEEF or CHICKEN (headed by the track HeartBreaker), which featured work from some of the most known hip-hop producers in the industry, and featured a sample of a song by Daft Punk. They are internationally recognized for their contribution to the movie Tokyo Drift soundtrack, Tokyo Drift (Fast & Furious).

TERIYAKI BOYZ first appeared in early 2004, on a compilation album by NIGO called (B)APE SOUNDS. The track KAMIKAZE 108 would appear here. However, it would not be until 2005 when the group released their debut album, BEEF or CHICKEN, fronted with the promotional single HeartBreaker. The song features a sample of Daft Punk's single Human After All (Daft Punk produced the track). The most notable thing about the album is its wide array of famous hip-hop producers, such as Ad-Rock of the Beastie Boys, DJ Premier and even The Neptunes. When the album hit stores, it reached #4 on the Oricon charts.

Despite the group seeming as if they were to be a one off side project (with due respect to each member's own groups), they have continued to release media. In March 2006, a live DVD entitled THE OFFICIAL Delivery Icchou was released (featuring a live version of Celebrity Death Match that was promoted in music video channels). Furthermore, Teriyaki Boyz would make a move into the US market by having one of their songs (Tokyo Drift (Fast & Furious)) used in the movie Tokyo Drift (and appearing on the soundtrack). Later in 2006, the album would be released in both the USA and UK (with HeartBreaker having a physical single released in the UK).