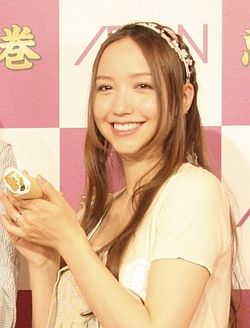 Toyota Ellie (豊田エリー) is a Japanese fashion model, talento, actress, and former member of the idol group Snappeas under the agency Stardust Promotion.

Toyota Ellie was born in 1989 in Tokyo to an English father and a Japanese mother. In middle school, she joined Stardust Promotion after being scouted and became a fashion model for various magazines like Disney FAN and My Birthday under her birth name Ward Erika. She also joined a short-lived idol singing group, Snappeas, in 2003. She changed her name to "Ellie" in 2004 and began to appear in commercials. In 2006, she made her acting debut by appearing in the movie Youki na Ganga ga Chikyuu wo Mawasu. She also hosted NHK English teaching show Erin ga Chousen! Nihongo Dekimasu for a year.

In 2007, she changed her name to "Toyota Ellie" and started to appear in music videos. Two years later, she got engaged to actor Yagira Yuya and married less then a year later in 2010. She also gave birth to her first child, a girl, in October 2010.