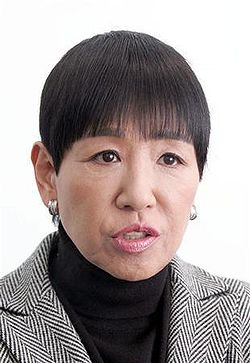 Wada Akiko (和田アキ子) is a Japanese singer, comedienne, and radio personality under the label Teichiku Records.

Wada Akiko got her start by singing at tea houses in the 60s after dropping out high school. One day, Horipro director Hori Takeo spotted Wada at a tea house for her height and singing voice and invited to the office for a contract.

She debuted as a singer with the single Hoshizora no Kodoku in 1968. Her aim during that time to be a Japanese-made Rhythms and Blues Queen. She became quickly a hit after her second single, Doshaburi no Ame no Naka de, topped the Oricon charts. The next year, she made her first appearance on the end of the program Kouhaku Uta Gaseen with the single, Waratte Yurushite. Wada has appeared on Kouhaku Utagseen even since 1970 and has been on the program 32 times. She also been the leader of the red team in 1997. She also made her first acting appearance in the movie Onna Banchou Noraneko Rock in the same year. And then, two years later in 1972, she finally won the Best Song Award at the Japan Record Awards for the single Ano Kane wo Narasu no wa Anata.

In 1973, she started to appear in various variety shows like Kinyou 10ji! Uwasa no Channel, where she earned the nickname God Nechan. Twelve years later, she would start her own variety show Akko ni Omakase!, which still on television and going strong today.

Wada later on collaborated with the R&B group m-flo for the song HEY!! in 2005. The single broke the top 10 on the Oricon charts and garnered Wada's first appearance on the white team of that year's Kouhaku Utagassen. In 2007, she opened her first produced restaurant Wada Ie in Tokyo and Shinjuku. Then three years later, Wada performed at the Apollo Theater in New York City to celebrate her forty years in being in show business.

As a victim of ovarian cancer, Wada was never able to have children. Due to this, she has become a foster parent to Filipino children. She explained that she doesn't want her name to be displayed everywhere but she does try to do her part.