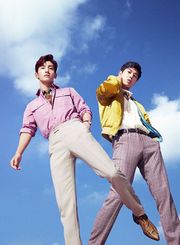 Tong Vfang Xien Qi (東方神起; Rising Gods of the East) (also known as Dong Bang Shin Ki (동방신기) in Korea and Tohoshinki (東方神起) in Japan, or by the acronyms TVXQ, DBSK, TVfXQ) is a K-Pop/J-Pop male duo (formerly five-member group) from Korea. They debuted in Korea in January, 2004 under SM Entertainment label with the single "Hug", and in April, 2005 in Japan under rhythm zone label with the single "Stay With Me Tonight". In 2009, legal disputes arose with SM Entertainment leaving, at that moment, the future of the group in Korea uncertain. One year later, in April 2010, avex stated through a press release that their activities in Japan were also put in hold or suspended. On November 23, 2010, SM Entertainment announced Tong Vfang Xien Qi comeback including only two members, U-Know and Max.

They own various records in Japan, with the single "Purple Line" they become first foreign male-group to have a #1 single on Oricon charts, Tohoshinki also broke Elton John's record for the highest first week sales by a foreign artist, which lasted for twelve years and four months with their 29th single "BREAK OUT!", and the release of their first best album, BEST SELECTION 2010, in February 2010 become the most sold album in its first week by a foreign group selling 412,861 copies.

Their 47th single "Hot Hot Hot" is released this week on July 31st.