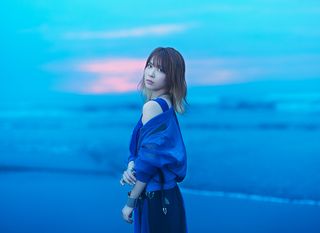 May'n is a Japanese pop singer signed to HoriPro talent agency. She debuted as an urban singer under stage name Nakabayashi May under Universal Music Japan in 2005 but later transferred to Victor Entertainment's sub-label flying DOG.

Nakabayashi has been an avid lover of music from a young age. At the age of 13, she participated in the Love Music Audition held by the HoriPro talent agency and was one of four chosen out of 34,911 hopefuls. In the year 2005, she debuted at the age of 14 as an urban singer under the stage name Nakabayashi May with the single "Crazy Crazy Crazy". Due to the lack of success of her three singles with Universal Music Japan, her talent agency decided to find a new path for her career. Nakabayashi took a one year hiatus to change labels, completing the transition in late 2007. Under the new stage name May'n (derived from May Nakabayashi), she was chosen to play the singing voice for the fictional idol "Sheryl Nome" in the anime Macross Frontier. Her debut single under flying DOG, "Diamond Crevasse / Iteza☆Gogo Kuji Don't be late", featured composition by Kanno Yoko and was released on May 8, 2008. Thanks to the popularity of the anime series, the single shot to #3 on the Oricon weekly charts and later became the 66th best selling single of the year.

On January 24, 2010, May'n performed her first solo Nippon Budokan concert, titled BIG★WAAAAAVE, which sold out in only one day. In March of the same year, she held her first tour of Asia, followed in July by a 17-city summer tour of Japan.

Her 18th single, "graphite/diamond", is released this week on November 20th.