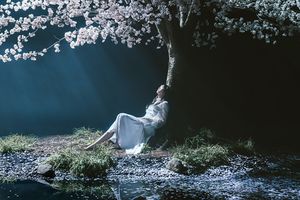 Aimer grew up surrounded by music from a very young age with her father being the bassist of a band. She began studying the piano in elementary school and highly looked up to artists Sheena Ringo and Hikaru Utada. In junior high school, she took up guitar after being inspired by listening to Canadian pop-punk rocker Avril Lavigne, and she began writing lyrics in English. At the age of 15, Aimer lost her voice due to over-usage of her vocal cords and was forced to undergo silence therapy for treatment. After she recovered she began to sing once again, but she had acquired her distinctive husky voice that she is now known for.

Aimer teamed up with the "agehasprings" group, which has worked with, produced, or provided music for various artists, including Yuki, Nakashima Mika, flumpool, Superfly, Yuzu, and Genki Rockets. In May 2011, they released the digital concept album Your favorite things. It covered numerous popular works. The #1 record cover was based on Lady Gaga's "Poker Face", and was the first song to appear in the lead album chart for the jazz category on the iTunes Store.

On September 7, 2011, she debuted for DefSTAR RECORDS with the single "Rokutosei no Yoru / Kanashimi wa Aurora ni / TWINKLE TWINKLE LITTLE STAR". She has since created many songs used as tie-ins with various anime series.