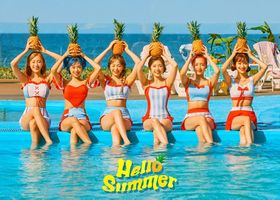 April (에이프릴) is a 6 member Korean pop girl group formed by DSP Media and debuted in August 2015. They were informally known as "DSP Girls" before their debut. Their group name means "girls you can't help but love", with the "A" representing being the best and the "Pril" referring to a lovable woman. Video teasers introducing the members began being released on July 20, 2015.

From 2012 to 2014, former member So Min was a member of the now-defunct girl group effort, PURETTY. The group debuted in Japan and disbanded in 2014 with plans to reform into other groups. In mid-2014, So Min and Chaewon became finalists in KARA Project, in which seven trainees competed to become the new members of label mates girl group, KARA. They finished in second and fourth place respectively.

On February 9, 2015, DSP media announced that they would be debuting a girl group that will be the next generation of Fin.K.L and KARA. In early August, DSP confirmed that April would debut on August 24th with the mini-album Dreaming. On November 9th, DSP Media has announced that after long discussions, leader So Min had made the decision to leave the group to further pursue her studies. On the same day it was also announced that the group would make a comeback in November as a 5-member group.

On February 18, 2016, April won the Girl Group Rookie of the Year award at the "22nd Korean Entertainment Arts Awards". Member Hyun Joo officially departed the group on October 29th to pursue her acting career. On November 10th, it was revealed that former PURETTY, KARA PROJECT, and Produce 101 member Chaekyung would be joining the group. On November 24th, it was announced that trainee Rachel would be joining the group as well as its sixth member.

Their second special single, "Hello Summer", is released this week on July 29th.