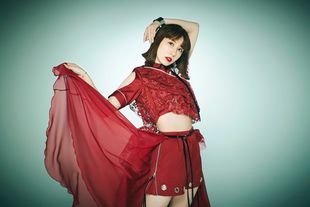 Tamaki Nami (玉置成実) is a Japanese pop singer currently under Warner Bros. She was chosen the winner from over 5,000 contestants in the 2001-2002 star search organized by Sony Music Entertainment. Her career rose to stardom with her debut single "Believe", which was released on April 23, 2003 when she was only 15 years old. The titular song was used as an opening theme song for the anime Mobile Suit Gundam SEED. It reached #5 on the Oricon weekly charts, where it charted for 24 weeks and sold 194,167 copies.

In 2008, after five years of being with Sony, Tamaki transferred labels to Universal Music. Her last Sony release, the remix best of album TAMAKI NAMI REPRODUCT BEST, was simultaneously released on March 25, 2009 with "GIVE ME UP", her first single on the new label. In 2011, she announced that she transferred labels to the TEICHIKU ENTERTAINMENT, INC. sub-label Imperial Records. She released her first single with the new label titled "LADY MIND" in January 2012, which was produced by DJ Osawa Shinichi. Since then, she released two more singles under the same label until 2014 when she transferred to another label, Warner Bros.

In 2014, Tamaki announced that she had become frustrated as she was having trouble singing her songs. She then went on to state that she had been struggling with sinitus since a young age and had regularly been receiving treatment, but decided to get surgery to fix the problem. Once recovered, she said that she felt good and no longer had problems. However, in 2015 she was diagnosed with vocal nodules as she had been having pain while singing once again. Tamaki stated that she would be receiving treatment during her current activities and that her plans for her upcoming musical would continue as planned. Due to her condition, she had to cut back her performance set-list while promoting for "Everlasting Love", her 25th single which was released under SPACE SHOWER MUSIC.

Her 26th single, "Connect the Truth", is released this week on August 5th.