Mobile Suit Gundam SEED (機動戦士ガンダムSEED), shortened to Gundam SEED is a TV anime series created by Sunrise and directer by Fukuda Mitsuo, based on scripts by Morisawa Chiaki with character design by Hirai Hisashi. It takes place is the Cosmic Era (C.E.), the fifth alternate calendar of Gundam series. The anime was aired in Japan at 6:00 PM Saturday slot of MBS and TBS from October 5, 2002 to September 27, 2003. A sequel titled Mobile Suit Gundam SEED DESTINY was aired one year later on the same broadcasting system.

Mobile Suit Gundam SEED is known for its popularity in Japan during 2002 and 2006 by winning the Animage's Anime Grand Prix prize in 2002, Animation Kobe's TV Feature Award, Japanese Otaku Awards in 2003 and Tokyo International Anime Fair's animation of the year in 2004.

January CE 71, Kira Yamato, a student and his friends are involved to an assault of ZAFT to hijacking the new Earth Alliance's mobile suits which are currently developed in Heliopolis, a space colony owned by Orb, a neutral country of Earth. During the battle, he meets Athrun Zala, his best friend since childhood who is a now a ZAFT soldier. The two take the Strike Gundam and Aegis Gundam and escape the destroyed base. Kira later teams up with the Archangel, an Earth Alliance new model battle ship to protect his friends, it was also revealed that Kira is a Coordinator. The series follow the journey of Kira with the Archangel and the rivalry between him and his best friend Athrun. 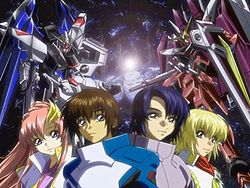 The main protagonist of Gundam SEED. Born as a first generation Coordinator, he is gifted with the ability of piloting a mobile suit. Kira befriended with Athrun Zala when the two attended preparation school on the Moon. At the beginning of the series, he was involved to an assault of ZAFT to Heliopolis and ends up piloting the Strike Gundam and boarding Earth Alliance's battle ship, the Archangel.
Voiced by Hoshi Soichiro

Kira's best friend and the second leading character of the series. After losing his mother in the Bloody Valentine tragedy, he enlisted for ZAFT and graduated from military school with excellent grades. He is wearing a red uniform and was assigned to Le Creuset team. Athrun hijacked the Aegis Gundam from Earth Alliance and became the main rival for Kira Yamato as his friend now siding with the Naturals.
Voiced by Ishida Akira

The daughter of Orb Union's representative, Uzumi Nara Athha, she is called "Princess" by her people. Cagalli met with Kira at the beginning of the series but soon parted after he forced her to a shelter and stayed behind. She later reappears in episode 15 as a member of the Desert Dawn resistance.
Voiced by Shindo Naomi

The daughter of PLANT Supreme Council Chairman Siegel Clyne. She is the fiancée of Athrun Zala and a pop singer in PLANT. She was rescued by Kira Yamato at the vestiges of Junius Seven and brought to the Archangel. She is later returned to ZAFT by Kira.
Voiced by Tanaka Rie

The music of Mobile Suit Gundam SEED was composed by Sahashi Toshihiko with assistances by Kajiura Yuki. Backing by the popularity of the series, all song singles and albums enjoyed good sales.

In the year 2002, after listening and getting inspired by "THUNDERBIRD", director Fukuda Mitsuo asked Nishikawa Takanori to perform the first opening theme, "INVOKE". In addition to this, Nishikawa also voiced the character Miguel Aiman and narrated a recap episode. "METEOR", a special equipment in the anime is named after Nishikawa's song "Meteor" which was used as an insert song while the concept of his sixth album "coordinate" is also based on the theme of Gundam SEED.

The insert song "Akatsuki no Kuruma" was first released in "Mobile Suit Gundam SEED SUIT CD vol.4 MIGUEL x NICOL" on June 21, 2003 but was later re-released as a single on September 22, 2004, Gundam SEED first anniversary due to the its popularity.

The episodes of Mobile Suit Gundam SEED was collected into thirteen DVDs, released one volume per month from March 2003 to March 2004. Each DVD contains four episodes up to volume 12 and volume 13 only spends two episodes. With a average of 58,205 copies sold per volume (not including Special Editions), Gundam SEED is the fourth best selling anime of all time in Japan.

In the year 2004, the events of Mobile Suit Gundam SEED were collected into three "Special Edition" movies with new and edited scenes. The first movie is from PHASE-01 to 21, the second is from PHASE-22 to 40 while the last movie covered PHASE-41 to 50.

A five volumes novel series of Mobile Suit Gundam SEED was written by Goto Liu with illustrations by Ogasawara Tomofumi and published by Kadokawa Shoten in Japan from March 2003 to January 2004. The three first volumes were licensed in United States by Tokyopop.

Aside from various game adaption by Bandai, Gundam SEED's character also were included in several video games such as Super Robots Taisen series and Another Century's Episode series.

On May 6, 2006, a movie for Mobile Suit Gundam SEED was announced at Sony Music Anime Fes. A short trailer showed Shinn Asuka, Athrun Zala, Kira Yamato, Lacus Clyne and Cagalli Yula Athha. However, the project was put on an unknown hiatus due to script-writer Morisawa Chiaki's health problems.