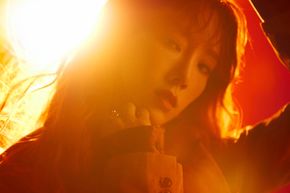 Before officially debuting as a solo singer, Taeyeon had recorded soundtracks for television dramas that proved successful on South Korean music charts, notably "Manyage" and "Can You Hear Me...?" in 2008. She released her debut mini-album I in 2015, which includes the Gaon Digital Chart number-one titular single. Her second mini-album Why peaked atop the Gaon Album Chart and spawned two Gaon Digital Chart top-ten singles, "Starlight" and "Why". Her debut studio album, My Voice, yielded the top-five singles "11:11", "Fine" and "Make Me Love You".

Her second Japanese mini-album #GirlsSpkOut is released this week on November 18th.