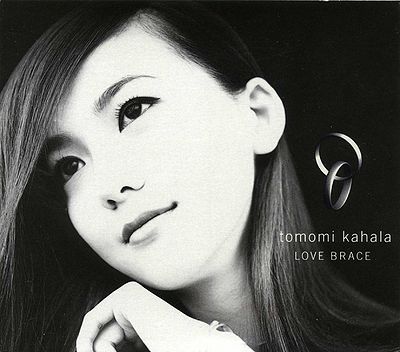 LOVE BRACE is the debut studio album released by Kahala Tomomi. Much like the singles leading up to the release, this record was produced by Komuro Tetsuya (he was also her boyfriend at the time). The album was extremely success for both Kahala and Komuro, and the two were invited to the end of the year program Kouhaku Uta Gassen to perform the best selling "I'm proud". The songs "Just a real love night" and "Living on…!" were used as radio singles to promote the record, and Kahala even performed them on several music television programs. To celebrate its success Komuro held a "hit anniversary party" at the New Takanawa Prince Hotel, hosted by him and the group dos. A month after the release, Kahala issued the album-cut "LOVE BRACE", which was released on the same day as Amuro Namie's Komuro-produced SWEET 19 BLUES.

The album reached #1[1] on the weekly Oricon chart, and continued to rank for a total of fifty-five weeks, selling 2,402,690 copies. It also reached #9 on the yearly Oricon chart for 1996. The record is also the #39 best-selling album in Japanese music history.[2]