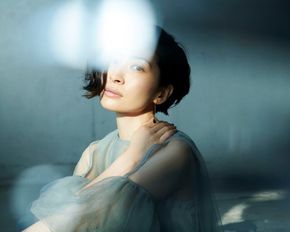 Sakamoto Maaya (坂本真綾) is a well-known seiyuu and Japanese pop singer-songwriter under flying DOG, a sub-label of Victor Entertainment. She made both her musical and voice actress debuts in 1996 at the age of 15 when she lent her voice to Kanzaki Hitomi in the anime series Tenkuu no Escaflowne.

She has also branched into singing, performing songs in both English and Japanese. Her debut single, "Yakusoku wa Iranai" which was produced by popular composer Kanno Yoko also was its opening theme. "Yakusoku wa Iranai" marked a beginning of a longtime collaboration between her and composer Kanno. Her singles "tune the rainbow", "Loop", "Ame ga Furu", and "Triangler" have all reached the top 10 on the Oricon weekly singles chart: "Triangler" in particular charted at #3 and remained charting for 26 weeks. Her albums have had similar success, with Shounen Alice and Yuunagi Loop both reaching the top 10 on Oricon weekly albums chart; and her album You can't catch me, released on January 12, 2011, became her first release to ever reach #1. She held a concert at the Nippon Budokan on March 31, 2010, her 30th birthday.

Her 32nd single, "Dokuhaku↔Yakudou", is released this week on December 9th.