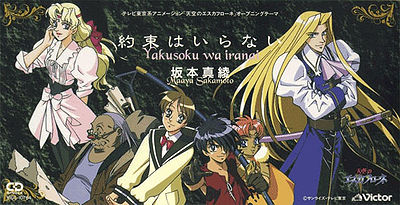 "Yakusoku wa Iranai" is the debut single released by Sakamoto Maaya. The title track was used as the opening theme to the anime Tenkuu Escaflowne which she voiced the character Kanzaki Hitomi, while "Tomodachi" is an insert songs for the same anime and "Hitomi no Tarot Uranai" is a short drama featuring Sakamoto's voices. The single reached # on the Oricon charts and charted for 4 weeks, selling 30,140 copies.

There are four known versions of Yakusoku wa Iranai to be found in Sakamoto Maaya's discography. These include: