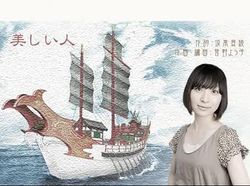 "Utsukushii Hito" is the first digital single released by Sakamoto Maaya. The song was used as the theme song for Kentoushi Fune Saigen Project, a collaboration cultural project between Japan and China. It was first performed by Sakamoto on May 8, 2010 at the launching ceremony of the cultural ship, leaving Osaka and heading to Shanghai. It was later released via Recochoku, the ringtone size was released on June 12 while the full size was available from June 12 to June 30. The song also marked her third collaboration with Kanno Yoko after their separation in 2004. It was later featured in her seventh studio album, You can't catch me as track #4. The song is part of her 15th anniversary celebration campagin.