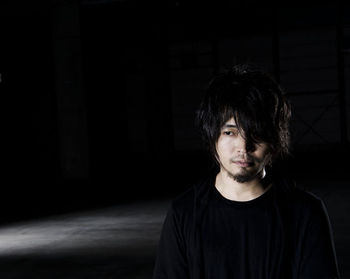 iLL is a Japanese electro-rock singer-songwriter, composer, DJ, and producer currently signed to Ki/oon Records. He got his start in 1997 as Nakamura Koji (中村弘二), the guitarist and vocalist of the band SUPERCAR. After the band broke up in 2005, he embarked on a solo career under the stage name iLL. The majority of his work is instrumental and experimental.

Nakamura Koji was born and raised in the Aomori prefecture of Japan. In 1995 he was invited by his childhood friend Ishiwatari Junji to join a band along with musician Furukawa Miki. After bringing Tazawa Kodai, a friend from junior high, the four formed SUPERCAR. Soon after they all started writing and recording and were soon offered a record deal by Sony Music Entertainment and signed under their Ki/oon Records sub-label.[2]

They made their major debut in 1997 with the single "cream soda". Nakamura acted as the band's guitarist and primary vocalist, with Furukawa working as a secondary vocalist. Nakamura soon took the role in the band as the principle songwriter, and Ishiwatari took control of writing the majority of the lyrics. The band's popularity took off with the release of the single "Sunday People" and the following album, JUMP UP.

In 2001, Nakamura started work on a solo project under the name NYANTORA. After this the band's sound began to take on a more electronic sound. In 2005, the band broke up and Nakamura and Furukawa embarked on solo career while Ishiwatari started his work as a producer.

In 2006, Nakamura began a new solo project under the name iLL. The project started out as audio and visual project with him releasing the album Sound by iLL and DVD iLLusion by iLL. Since the begining of this project Nakamura has become a well sought after DJ and remixer. He has also help former band-mate Furukawa by playing guitar and synth, as well as composing several tracks on her albums Mirrors (2006) and Bondage Heart (2008).