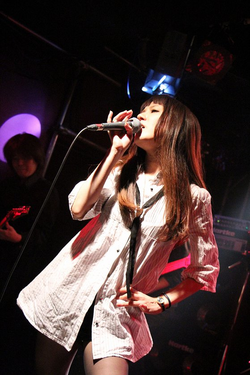 ALiCE is a Japanese pop singer. She made her debut in the Bemani line of music simulation video games from Konami, including Dance Dance Revolution, as a second generation member of BeForU under her real name. In 2007, she graduated the group to pursue her solo career, and in 2008 she changed her stage name to ALiCE. In 2011 she joined the group Fuwafuwa Shisugite Wakarimasen. (also known as Fuwa Waka). She is also the vocalist of the unsigned band USAGI DASH.