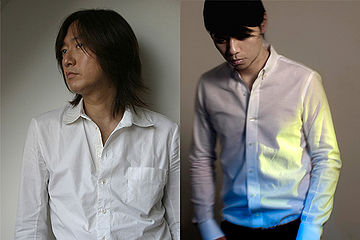 BRADBERRY ORCHESTRA was a J-Pop-J-Tek duo co-founded by producers Kobayashi Takeshi and Shinichi Osawa under the avex trax sublabel OORONG RECORDS. Their debut digital single, "Lucky", was released digitally in late 2009. Their sole mini-album, Vol.0, was released on March 16th, 2011. As of 2014, no more updates have been given on the status of this group.

BRADBERRY ORCHESTRA debuted in October 2009 with the digital single "Lucky", featuring Salyu and ellie. This was followed by their public debut at the BBO RECEPTION PARTY the following month at Billboard Live TOKYO. Their second digital single, "LOVE CHECK", was released on April 1st, 2010. It was the first of three tie-in songs to commercials for the Sony Ericcson-NTT DoCoMo XPERIA smartphone. The song was also performed in their televised debut at the WORLD STAGE x MTV VIDEO MUSIC AWARDS JAPAN 2010 that May. Two additional songs, "To be (or not)" and "L.P.D" were subsequently promoted as the second and third tie-in songs for the Sony Ericcson/NTT DoCoMo XPERIA smartphone CM.

At the end of 2010, it was announced that two new songs, "Mutation" and "kizamu", would be used as the beginning and ending themes respectively for the upcoming Playstation 3 video game Ryo ga Gotoku OF THE END, the third spin-off in the Ryu ga Gotoku series (otherwise known as the "Yakuza" series in Western territories). BRADBERRY ORCHESTRA's debut mini-album, Vol.0, was released on March 16th, 2011, with all tie-in songs included, plus one new song.

After a period of inactivity, it was announced in 2012 that the duo would compose a new song as TV Tokyo's broadcasting theme for the 2012 London Summer Olympics, called Physical. Another period of inactivity occurred before a lineup revamp in 2013, adding model and DJ Diana Chiaki on vocals, Yoshito Tanaka on guitar, and Gota Yashiki on drums, respectively, with Kobayashi on keyboards and chorus vocals and Osawa on synths and bass. Despite a song released exclusively on YouTube in 2014, no other posts have been made regarding promotional activities since; however, their official website, Facebook, and YouTube pages remain active.