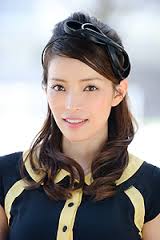 Chinen Rina (知念里奈) is a former Japanese pop idol, turned dorama actress. She attended the acclaimed Okinawa Actors School whose graduates incluse, Amuro Namie, MAX, and OLIVIA. She debuted on the music scene in 1996 with the single, DO-DO FOR ME. She started acting in 1997, and she became very popular. Because of this her music sales went up. After a five year run as a model, Rina left to be an full time model/actress. Her leaving is most likely due to her sinking sales. 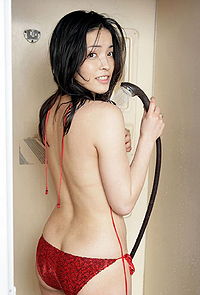 From a young age, Chinen dreamed of being a star. To help her reach this goal, she went to the Okinawa Actors School in hopes it would aid her towards her dream. At the school, Chinen studied professional vocal training and dance. Her dream became reality when offered a contract by Sony Music Entertainment. She debut with the single "DO-DO FOR ME" in 1996. Not long after its release, Chinen decided to branch out and be an actress. She starred in the dorama Five, which brought everyone's attention to her, in 1997. She went onto release two successful single within that same year ("precious・delicious" and "PINCH -Love Me Deeper-", respectively), both reaching into the top 20 on the Oricon. Because of her new found popularity she was named and awarded as the Grand Prix new member prize of 1997.

She went on to release two more singles in 1998. In January, she released "Break out Emotion", which ranked in at #24 and selling less units than any previous release. Three months later saw the release of "Wing" which is her biggest hit, ranking in at #5 on the Oricon. Soon after it's release, with five singles under her belt Chinen released her debut album, "Growing". The album was a big success reaching #2 on the Oricon.

Only a month had passed since the release of "Growing" and Chinen had another single out, "Be yourself". With this single Chinen started to shed her Eurobeat, dance-pop sound and picked up a slight rock edge to her music. She went on to release three more singles with her new found style. With the release of Chinen Rina Growing Tour 1999, she had continued her new found rock chick image. During most of the concert she played her guitar while singing. She did change and comeback without and finished the concert with the pop portion.

Her last single of '99 ("IN YOUR EYES") was a power balled. It became Chinen's last single to enter the top 20 on the Oricon. In February of 2000 she released "Baby Love", the single reached #25 and selling more copies than "IN YOUR EYES". Only a month later came the release of the album, "Passage -Best Collection-". The album collected all of her single up until that point(DO-DO FOR ME through Baby Love). It also had an acoustic version of her "My wish" track and a new song entitled "again". The album reached #10, and from this point on her stardom feel.

Over the course of her next four singles sales started dropping. Each single she released ended up selling less then the single before. With the release of "Love, make together" she changed to a more mature and sexier image. With this single she also changed her musical style to more of an R&B sound. "CLUB ZIPANGU" was even a Japanese language cover of Ricky Martin's She Bangs and released under R・I・N・A. This was most likely done to help boost sales, but failed. She then released her second original album, "breath" which also ended up being her last. The album reached #29 on the Oricon charting only for two weeks and become Chinen worst selling as well as worst ranking album. After a few lives to support the album, Chinen fell off of music scene.

She began to date model Nakamura Kentaro in 2004. She later married him a year later on August 10 in a shotgun wedding. At the same time, she announced that she was three months pregnant. She later gave birth to a son on March 11, 2006. However, Nakamura and Chinen didn't stay together for long as they divorced a year after their son's birth with Chinen stating that Nakamura's drug problems was the reason for breaking up.