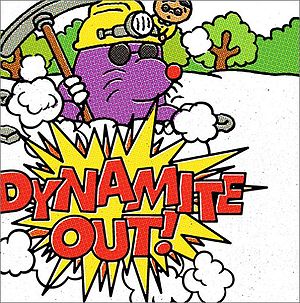 Dynamite out is the third DVD (second live concert DVD) released by Tokyo Jihen, and follows up from their first, Dynamite in. This was filmed on their first live tour Dynamite!. This live tour relates to Tokyo Jihen's Kyouiku album, though there are songs featured on here that aren't from it. Many songs are actually covers of Shiina's previous solo work. "if you can touch it" is a song from Hirama Mikio's solo career, featured on the Yume to Negoto album. "Toumei Ningen" and "Superstar" were songs that at the time of the DVD release, were yet to be released. They are now featured on Tokyo Jihen's second album, Adult. The DVD reached #2 on the Oricon weekly charts and charted for 18 weeks.