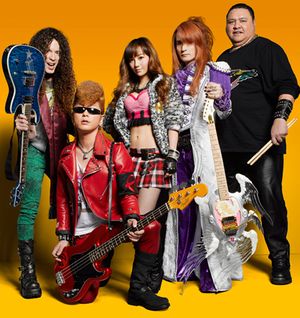 FANTA is a Japanese supergroup that was created to promote Coca-Cola's drink Fanta. They made their broadcast debut in 2010 and their musical debut in 2011 under avex entertainment.

The first Fanta commercial featuring the band began airing at the end of February 2010, but the members' identities were not clear.[1] On March 10, 2010, their identities were revealed on the television show Waratte Iitomo! when they appeared on the "Telephone Shocking" segment.[2] Later on the same day, they held a debut event at HMV Shibuya among the press.[2]

On July 14, 2010, the band held its first live as the opening act for Odaiba's summer festival Odaiba Gashuukoku 2010 Kaikoku Zen'yasai.[3] They performed an acoustic rendition of The Rolling Stones' "(I Can't Get No) Satisfaction".[3]

It was announced on February 15, 2011 that Akebono was dismissed from the group. Takamiy explained that since they were about to introduce a new Fanta flavor, the band had to change as well.[4]