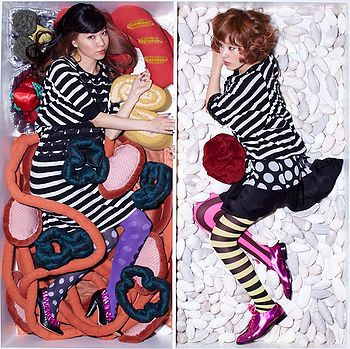 HALCALI (ハルカリ) is a Japanese pop-rap duo currently under Epic Records Japan. The band made their debut in 2003 under the FOR LIFE MUSIC record label with the single "Tandem". The band gained a lot of attention with their third single, "GiriGiri Surf Rider" which reached #10 on the Oricon weekly charts. Since the release of the bands first album their sales had dropped until the release of "Konya wa Boogie Back" in 2009, which reached 700,000 downloads and topped out at #4 on the Oricon rankings.

Its members are Haruka (nicknamed Halca) and Yukari (nicknamed Yucali). The group's name is a combination of the two members' names: 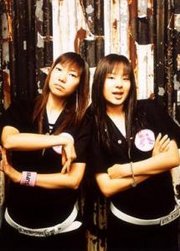 YUCALI and HALCA met during their elementary school years and when they attended the same dance school. Both girls only intended to train in dance and wanted to eventually become back up dancers for other musicians. Eventually they were encouraged to take singing lessons as well, although it remained a secondary interest.

In 2002, Halca and Yucali spotted the poster that would lead them to the RIP SLYME audition to form a new rap group. Although they both enjoyed rap music, they originally were only interested in the audition because the poster was pink and adorable.

They blew away the crowd and representatives from O.T.F. (Oshare Track Factory) jumped at the chance to produce this talented young group (O.T.F. is composed of DJ FUMIYA and RYO-Z, two members of the popular hip-hop group RIP SLYME).

In July of 2002, during a free concert held at the Budokan theatre, HALCALI performed with RIP SLYME and their introduced their first single, "Tandem". O.T.F. decided that the song sounded more natural if the rapping in "Tandem" didn’t sound too rehearsed, so he gave the lyrics to HALCALI and they recorded on the same day. By the time promotion for the single started HALCALI’s classmates and teachers had caught wind of their debut and were very supporting. To show their support they even played "Tandem" on the speakers at their school on the day it was released. 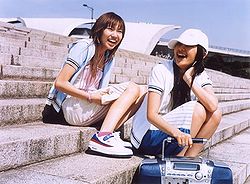 2003 was their year. In January they released "Tandem" and a couple months later, their infamous single Electric Sensei. Another single followed, then their first album, HALCALI Bacon. Although mostly produced by O.T.F. it also began to bring in other hip hop musicians, such as the Fantastic Plastic Machine and Kohei Japan, to help with some of the tracks. The album was popular and ended up making it to number five on the Oricon album ranking. This made it the first album by a female hip-hop artist to make it into the top ten.

2004 they relased two singles "Marching March" and "BABY BLUE!", plus their second album "Ongaku no Susume". The album was produced by O.T.F. but brought on the extra talent of artists like Supercar, RHYMESTER’s Utamaru, and m-flo. Although Ongaku no Susume didn’t end up selling as well as HALCALI Bacon, HALCALI was still nominated for awards at the year’s end including a Best Pop Video at the Space Shower TV awards for "BABY BLUE!".

In March of 2005, HALCALI came out with a remix album of their most popular songs called HALCALI Mix. Then, they announced that they had left the For Life record label and that they had signed onto Epic Records, a subdivision of Sony Music Japan. Their first major release was "Tip Taps Tip" which was used as the ending theme to popular anime Eureka Seven. The b-side "HALCALI‘n’bass" became the first song that HALCALI helped to write. This new maturity carried on into their new fashion style as well, scoring them many appearances in Japanese fashion magazines such as Zipper, Jille, and SEDA. 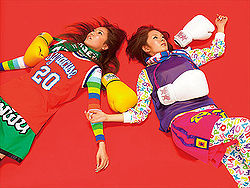 In 2006, the girls released their second and third major single called "Twinkle Star" and "LOOK". The last one ended up becoming an anime theme, this time to the Japanese Powerpuff Girls Z.

The following year HALCALI had released another two singles, "Tougenkyou / Lights, Camera. Action!", their first double a-side release, and "It's PARTY TIME!". In July, the duo released their first major album Cyborg Oretachi. That month they also made their debut in France, appearing at Japan Expo.

The Paris Japan Expo appearance spawned a series of concerts across the world as HALCALI traveled to different cites in Europe before announcing that they would be making their US debut in Chicago. After meeting with the successful appearances in Paris and Chicago, Sony continued to promote HALCALI overseas by promoting them in New York City and having them return to Paris.

On November 12, 2008, HALCALI returned to the japanese scene, this time for the anime NARUTO, with "Long Kiss Good Bye" as its ending theme song. Almost a year of hiatus, HALCALI released "Re:Yasashii Kimochi", a song that samples Chara's "Yasashii Kimochi".

For 2010, it's scheduled a new single titled "ENDLESS NIGHT". 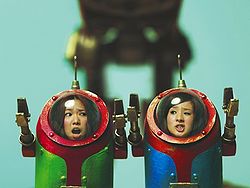 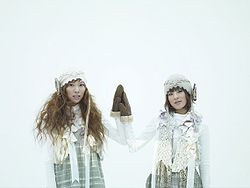 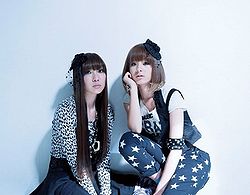 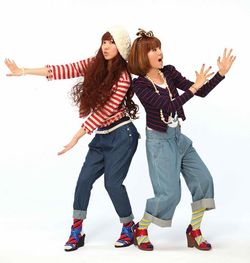