I'll Be There for You (LED Apple) 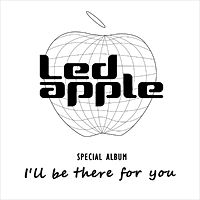 Artist
LED Apple
Single
I'll Be There For You
Released
2013.02.07
Tracklist

"I'll Be There For You" is the third digital single released by LED Apple. The single includes a Korean version of their English song of the same name, which was only sung by Han Byul and used as insert song on the drama 7th Grade Civil Servant. The English version was released one week later on the digital single 7th Grade Civil Servant OST Part.3.