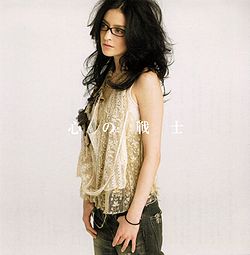 "Kokoro no Senshi" is the second single released by Angela Aki. The title track was used as the ending theme song for the Nagoya regional TV news show News Plus 1. The first press of the single included an exclusive DVD, featuring the music video for "Kokoro no Senshi" as well as the FINAL FANTASY XII Premiere Movie, which was a showcase of Final Fantasy XII set to the English version of "Kiss Me Good-Bye". "TODAY" is a Smashing Pumpkins cover, and "Eyes On Me" is a cover of the Final Fantasy VIII theme song sung by Faye Wong. The single reached #13 on Oricon charts, and in it's first week sold 12,645 units; roughly three times better than her previous single, "HOME". In it's second week it peaked at #27 and sold 6,661 units, while in it's third it peaked at #50 and sold 3,088. This single sold a total of 36,717 copies and charted for seventeen weeks.