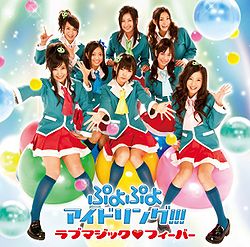 "Love Magic♡Fever" is the 10th single released by Idoling!!!. It was their last release of the two consecutive game tie-up singles (the other single being "Tenohira no Yuuki") for which the group was divided into two units. The title track, used as image theme song for the game Puyo Puyo 7, was performed by Puyopuyo Idoling!!! (ぷよぷよアイドリング!!!), formed by Yazawa Erika, Fonchi, Kawamura Yui, Nagano Serina, Sakai Hitomi, Asahi Nao, Kikuchi Ami and Hashimoto Kaede.

The B-side, "Snow celebration -everlasting story-", is a re-arranged and remixed version of their second single' first A-side. It was released after it became the "No.1 Song Fan Voting" during the group's 6th live concert. The single reached #10 on Oricon charts, and charted for 2 weeks, selling 8,444 copies on it's first week.